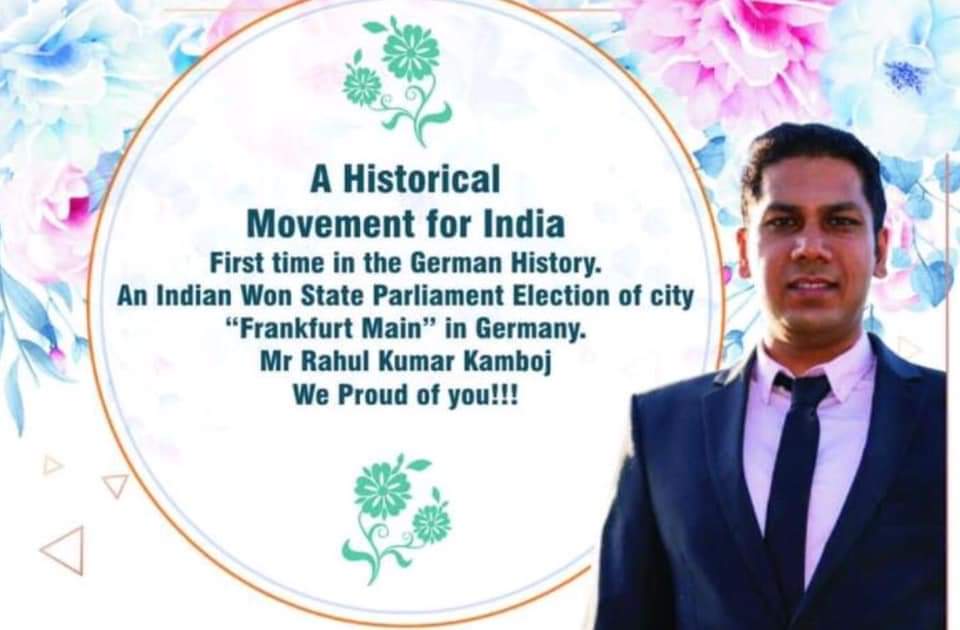 History created by Rahul Kumar Kamboj. First time an Indian has been elected as a city parliamentary member in Frankfurt Main, Germany with more then 160.000 Votes.

Rahul Kumar Kamboj born on January 10, 1987 in Alahar, Distt Yamuna Nagar, Haryana – India) is a German politician. The computer scientist grew up in Frankfurt am Main and holds German citizenship. Rahul Kumar belongs to the family of the Kamboj,s living in India

Early Life: Rahul Kumar has worked for various industries, including the automotive industry, banking and the medical industry. For almost six years he worked for the German Society of Internal Medicine (DGIM) as head of the member administration as well as federal data protection officer of Europe’s leading specialist society. During this time,

Rahul Kumar was also an author for the medical journal “DerInternist” and regularly wrote articles and articles. [7] In 2015 he was established in the IT industry and founded his own company based in Kelsterbach. Since 2014, he has regularly awarded seminars on behalf of the Chamber of Commerce and Industry (IHK) Wiesbaden and is an official member of the Chamber of Commerce’s Examination Committee

‘National Youth Vice President‘  of the Party Nationalwide in Sep, 2020.

The Party tursted him to give an opportunity in the 2021 election as their candidate from the Mulitinationl City “Frankfurt Main“ Which was conducted on Marh 14, 2021 – He won the election with a hughe diffence of more than Fifty Thousand (50000) votes.

Rahul Kumar was elected as the youngest chairman of the VdK Kelsterbach Social Association. The non-profit organization has about 1.8 million members throughout Germany.

Rahul Kumar is an inisiator and managing director of the non-profit children’s charity KfK – Förderverein für Kinder E.V  Patron of the KfK are among others the former district councilor of the Hessian Rheingau-Taunus-Kreis Burghard Albers as well as the incumbent mayor Martin Hußmann from Bad Schwalbach.

After completing a special training in the state capital Wiesbaden in 2016, Rahul Kumar is a full member of the Hessian police in the police headquarters in West Hessen.

Since 2010, Rahul Kumar has organized and directed a variety of cultural events throughout the Rhine-Main Building.  In the following years he realized various charitable aid projects, among others a large-scale blood donation campaign in cooperation with the German Red Cross, establishment of a music school in a day care center and some tree planting activities with the city of Heidenrod and Frankfurt am Main.

In 2016 he started together with the city of Kelsterbach, the Indian Consulate General in Frankfurt am Main, as well as the KfK e.V. the music and dance event “Sounds of Rainbow” in Kelsterbach with a record number of more than 700 guests. Among those present were the state parliamentarians Kerstin Geis (SPD), Sabine Bächle-Scholz (CDU) and the Indian consul general Raveesh Kumar.

Landrat of the Rheingau-Taunus-Kreis Burkhard Albers honored Rahul Kumar in March 2014 with the honorary card of the state of Hesse as a sign of gratitude and appreciation.  In May 2016, Rahul Kumar was honored with the Golden Temple Decoration of Honour by the Sikh community in Frankfurt am Main as part of the Nagar Kirten event. After the successful election in 2016, Rahul Kumar and his brother Kapil Kumar were greeted by several thousands of guests with drums and traditional turbans in his hometown of Yamunanagar India.  In January 2017, Rahul Kumar was invited to the Pravasi Bharatiya Divas PBD event of the Indian Consulate General In Frankfurt as guest of honour and speaker.