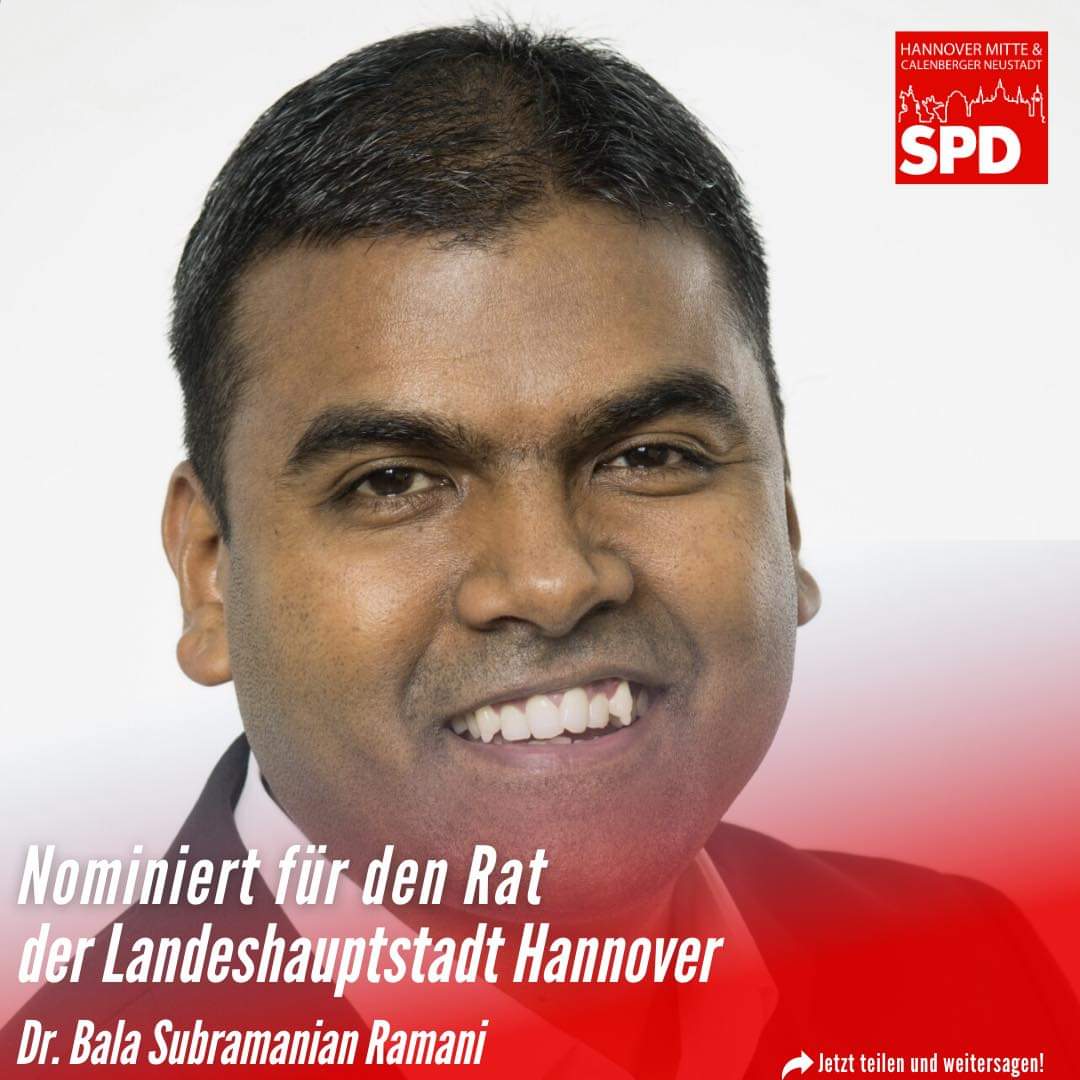 Dr. Balasubramanian Ramani obtained his Bachelor’s degree in Zoology from Bharathidasan University, Tamil Nadu as a gold medallist. He went on to complete his Master’s in Marine Biology as a topper from Annamalai University, Tamil Nadu. His Master thesis was awarded the Best Student Project by the Tamil Nadu State Council of Science and Technology. He pursued his PhD in Marine Botany from Leibniz University of Hannover with a scholarship from the Government of Lower Saxony, Germany. His research articles published in international journals contributed to the Indo-German research on marine plant biology and reclamation of salt affected landmasses and enhanced further collaborations and partnerships in that field.
Inspired by the words of Sardar Vallabhbhai Patel – “My only desire is that India should be a good producer and no one should be hungry, shedding tears for food in the country”, Dr. Ramani founded the Young Professional’s Platform for Agricultural Research (YPARD) funded by Swiss Agency for Development and Cooperation (SDC), Government of Switzerland in 2005. As a Global Coordinator of YPARD, he travelled to more than 33 countries and created a platform for motivating young professionals to focus on global agricultural issues. He then successfully negotiated YPARD to be a part of the United Nations Food and Agriculture Organization in 2010.
In his capacity as Advisor and Regional Coordinator of India Relations at the Leibniz University of Hannover, he plays a crucial role in strengthening the ties between India and Germany, especially in science and technology through academic exchanges. He is also the Advisor of Centre for Modern Indian Studies (CeMIS-UC) and the German Research Centre for Comparative Vocational Education and Training in the University of Cologne. The role is to usher in an intensive cooperation for vocational education and training in India. He served as the Member of the Board in World Association of Young Scientists, Paris from 2005-2009.
He was instrumental in launching the Indian Academic Society at the Leibniz University of Hannover in 2009 to facilitate academic interactions among Indian students. His commitment to address the social, cultural and educational needs of the Indian diaspora led to the establishment of the Indian Association Hannover (celebrating 10 years in 2019). IASH endeavours to promote rich cultural heritage of India and provides platform for an intercultural dialogue. Dr. Ramani together with the Embassy of India, Berlin developed an interactive platform called Indian Students in Germany, which is now being administered by the Embassy of India, Berlin.
Inspired by the life and teachings of Mahatma Gandhi, he always be ieved that the Gandhiji’s teachings on non-violence are relevant in the contemporary world. This belief transpired into the installation of Mahatma Gandhi’s Bust at a prominent location in Hannover city that has been sponsored by the Government of India. His confidence that the bust would disseminate the message of peace, especially

amongst youths, convinced convincing key political organisations/ parties in Hannover to support this initiative. The bust was ceremoniously unveiled by the Prime Minister of India on 12 April 2015. In collaboration with the City of Hannover, Dr. Ramani conceived and organised the first ever Indian Cultural Week and India Days in March 2019 to commemorate the 50th anniversary of signing of Indo-German Cultural Agreement.
Imbibed with the values of pluralism and diversity and to promote tolerance and equality in the society, he joined German politics as a member of the Socialist Democratic Party (SPD) in October 2012. He was elected as Councillor and member of the City Council for Hannover Central Constituency in September 2016. He is the Chairman of SPD in Hannover’s Central constituency since November 2016. He is also an elected member of the Committee of International Affairs Europe and International Integration for Hannover. His aptitude in internationalizing the City of Hannover through forging of collaborations in culture and education has earned him accolades from peers. With homespun values of cultural diversity coupled with inherent sense of enthusiasm, he actively engages himself in the promotion of Hannover as an attractive destination for international students.