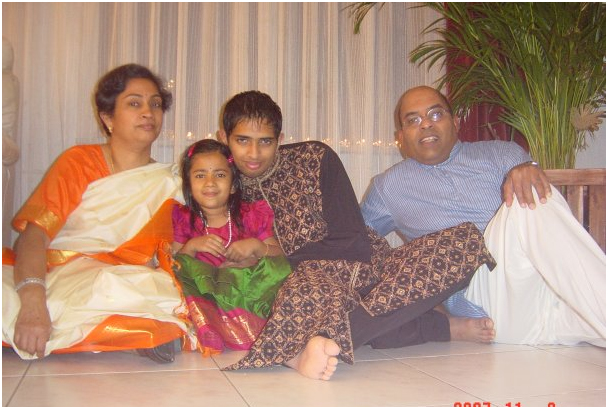 Married to Jaya in India in 1990, and has a son Raghav and daughter Saumya.

Family principle: Family as a unit is supreme. NO PATRIARCHIAL FAMILY. CONCENSUS is the buzz word.

Born and brought up in a small town named Berhampur at Andhra-Orissa border in India, talked at home in Tamil, studied in Telugu language, interacted in society in Oriya and Hindi languages, worked in CMC Hospital Vellore and shifted to NIMHANS( national institute of Mental Health and Neuro sciences) as junior resident in Neurology, learned to talk in kannada language, went to Lusaka, Zambia, and worked as registrar in Psychiatry for 5 years in chainama Hills Psychiatric Hospital. Moved  to Botswana, as Medical Officer in Maun, Ngamiland in Okavango delta, worked as medical Officer and Superintendent of Hospital for 5 years,doing all types of operations, researches on Malaria,interacting with doctors from all over the world and treating multi cultural tourists visiting the tourist spots in Maun and shifted back to India and started practicing as G.P. in NOIDA, satellite town of Delhi.

Effected by “reverse culture shock”, astrologer predicting bleak future, but good “stars” for Jaya… sitting in the clinic…scanning the news papers, saw an advertisement on arrival of a recruiting team, reaching Delhi to recruit soft-ware engineers in Netherlands!

I put my C.V. for acceptance with bundle of my work…commission for expatriate doctors recognized my degree on merit basis( one of the rare) in those days.

One more language to add to my lingo profile….one year hard work on dutch language….but no job!!!!!

After one and half years decided to go back, got admission for Raghav in Hyderbad school, tickets booked, notice for vacating house given….then…then one week before flight telephone rings. It was call from a Hospital asking me to join the hospital as medical officer on next day!!!!

No….! I want to go back! Asked for an interview with the recruiters, all conditions met! Went to India, Raghav in India, ..temporary job taken in Netherlands…accepted by hospital …brought back Raghav…did emergency medicine course…worked for 13 years in emergency medicine…..want respite from stress. Since 2013 coordinator in Hospital in the up coming Orthpedic centre.

After intercontinental experience in cross cultural differences in expression of pain, even wrote a chapter in the book “Trauma and pain(Bio psychosocial perspective) authored by Prof. Meena Hariharan, Director, faculty of psychology, University of Hyderabad. ISBN: 978-81-8220-353-2

Very much interested in integrating Surinami Indians with native Indians.

Social norms: To integrate in any society anywhere in the world as world citizen.

Plans: To retire in Netherlands, give best of the professional help to Indians(floating and non floating), in the form of improving communication skills with health professionals.

NEVER GIVE UP. KEEP YOUR EYES, EARS AND SENSES OPEN! SEARCH FOR LUCK…BE HONEST AND  SMART!

I reckon something genuinely special in this web site.

Thanks so much for the blog. Fantastic.

I adore this site – its so usefull and helpfull