When they met: On documentary film Amma & Appa 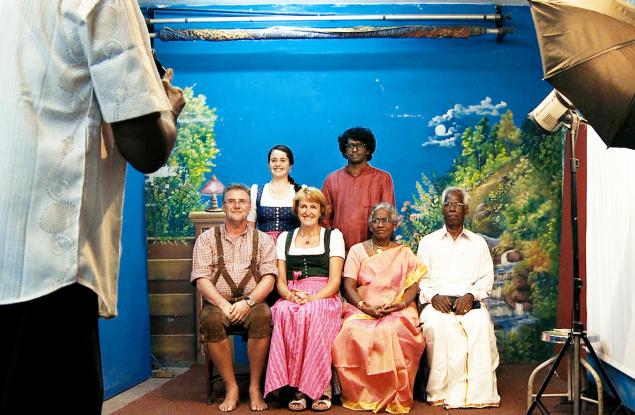 When they met: On documentary film Amma & Appa

Jay’s mother shakes her head. Seated on the sofa of their Cuddalore home, she’s almost in tears as she expresses disbelief over her son’s decision to marry someone from Germany. Germany! She would have had a tough time accepting a bride from a different community, let alone a different country. The documentary film Amma & Appa, written and directed by Franziska Schönenberger and Jayakrishnan Subramanian, tells the story of their parents meeting for the first time. It was screened recently by The Cinema Resource Centre at Ashvita Bistro.

Jay’s grey-haired, spectacled mother, who is stubborn in her stand and raw in the expression of her love for her son, lingers in our minds at the end of the 89-minute documentary, much like the 80s Ilaiyaraaja songs used in the background score. Two couples, who’ve spent over 30 years in marriage in different parts of the world, are brought together by the love of their children Franziska and Jayakrishnan.

Franziska was a student of the University of Television and Film Munich when she first came across Jay’s blog. Jay is an artist and she wrote to him for her documentary on young Indian artists. The two soon fell in love and what followed was a two-year long-distance relationship. “I never made the film. We ended up making Amma & Appa instead,” laughs Franziska.

The film starts off with Franziska’s first meeting with Jay’s parents. The loud procession of ‘a temple on wheels’ by their home in the evenings, the deities that Jay’s mother adorns with flowers every morning, the black-and-white photos of the couple after their arranged marriage, the exchanges between his parents on the kind of life they wanted for their son… Franziska feels out of place amidst her future in-laws who are traditional to the hilt.

How will the meeting between her Bavarian parents and her South Indian parents-in-law go?

They arrive on a hot day in an Ambassador — it’s their first trip to this part of the world and the first time that Jay’s parents are hosting foreigners.

The camera follows them around as they get acquainted over food, sari shopping and photo sessions at the local studio. The film documents these everyday occurrences, the conversations and interactions of two couples from completely different backgrounds and cultures.

Extremely personal as it is, Amma & Appa is also universal. As Franziska put it at the discussion after the screening, the camera and their three-member crew made the uncomfortable moments easier to go through. And there were many. For instance, Jay’s mother says that Franziska’s extremely emotional, which in her opinion is not good. She says, “When she’s happy, she’s quick to go ‘ha ha’ and when she’s sad, she instantly cries ‘hu hu’.”

Amma & Appa has been screened at the Berlin International Film Festival 2014 and across the world, including Oman, Melbourne and Iran.