New Indian template for Pakistan: We won’t talk to Hurriyat and won’t allow you to talk to them 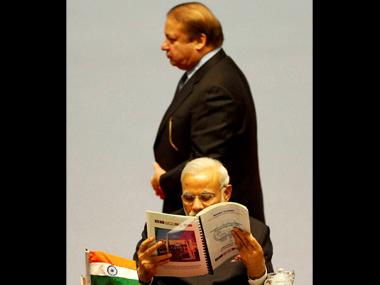 After the heat and dust over the India-Pakistan NSA talks is over, it is time to mull over who gained and who lost and what lies in store for the south Asian rivals’ bilateral engagement in near future.The slugfest over NSA talks has left a lot of bitterness between India and Pakistan, not to talk of the trust deficit which has already touched its lowest depths. This will make another India-Pakistan meeting at any level well nigh impossible in the next few months.
Firstpost understands that the two prime ministers, Narendra Modi and Nawaz Sharif, will not be meeting in New York in September even if their itineraries were to match. The Modi government does not have the appetite for the next summit meeting after the way bilateral relations have panned out post Ufa summit on 10 July.
The sense this writer has got today from a top official is that the Modi government is in no hurry to reach out to Pakistan and any substantive bilateral meeting is ruled out for 2015.The year 2016 may bring India-Pakistan bilateral engagement on the front burner for various reasons. One, several months would have gone by and egged by international community the two neighbours would have to take another shot at serious talks in the new year. Two, by January, 2016, Pakistan would be reaching out to SAARC countries for the next SAARC summit which it would be hosting.
If all goes well, Pakistan may be hosting next SAARC summit in July 2016, perhaps on 3 July. To make the event success, Pakistan will have to lower down its anti-India rhetoric in words and deeds if it wants Prime Minister Narendra Modi to travel to Pakistan to attend the multilateral event.
But whenever the next India-Pakistan bilateral engagement takes place, it will be under a new paradigm that the Modi government has created for Pakistan in the collapsed NSA talks even before they could begin.
The new Indian template for Pakistan can be summed up in one sentence: We won’t talk to Hurriyat leaders and nor would we allow you to talk to them.
This is the new Pakistan policy architecture that Team Modi has constructed for its dealings with Pakistan henceforth. It is a take-it-or-leave-it approach.
While cancelling the NSA talks, the Pakistani foreign ministry had issued a detailed press release in which it had talked about why Islamabad could not accept Indian argument that Pakistani national security advisor Sartaj Aziz could not meet Kashmiri separatists during his then proposed India visit. The full text of the Pakistani statement can be accessed here http://www.mofa.gov.pk/pr-details.php?mm=MzAyNw.
The relevant paragraph in this statement on Kashmiri separatists is as below: “As regards the second pre-condition regarding meeting with Hurriyat leaders, it has been pointed out repeatedly that it has been a long-standing practice that whenever Pakistani leaders visited India during the past twenty years, they have been meeting Hurriyet leaders. It would be inappropriate for India to now impose the condition of changing this longstanding practice.”
The Modi government’s conscious strategy, as demonstrated during the slugfest over NSA talks, is to change this once and for all.
This writer has been given to understand that the Modi government will stick to hands-off-Hurriyat policy for the remainder of its term. Once this policy remains in force for three or four years, India would have successfully changed the paradigm. Pakistan then would be in no position to cite this “long-standing practice”.
This is the single biggest message that the Modi government has sent out to Pakistan in the just-failed NSA talks even before they could begin.
The Modi government is confident that it will implement this new template and is conscious of the fact that while doing so it would have to deal with the inevitable concomitants like spike in cross-border firing and infiltration and an uptick in terror acts.
Besides, New Delhi is also acutely aware of the fact that elements in Pakistan are itching to take revenge for Yakub Memon’s hanging on 30 July.
The viewpoint of key stakeholders in India’s Pakistan policy is that the ball is firmly in Pakistan’s court and it would be meaningless to engage with Pakistan if that country does not agree to the new template drawn by the Modi government.
Pakistan government can be assured that the Modi government’s new paradigm vis-a-vis Kashmiri separatists is a policy cast in stone.

No Thoughts on New Indian template for Pakistan: We won’t talk to Hurriyat and won’t allow you to talk to them