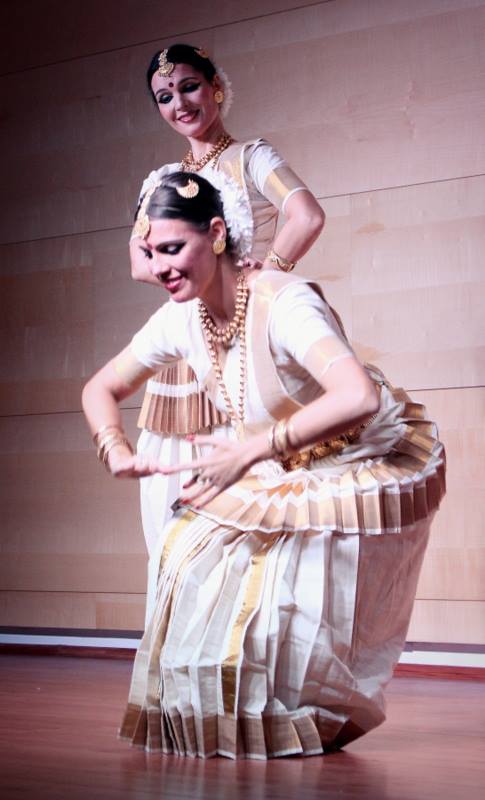 Mohiniyattam, the traditional classical dance form from Kerala, (India) is among the eight Indian Classical Dances recognized by the nation’s autonomous institution for arts, the Sangeet Nataka Academy, New Delhi. The dance form which had its origin centuries back attained significance during the era of Maharaja Swathi Thirunal. In the past few years, as any other art forms, Mohiniyattam is also gaining the popularity all over the world.

In the month of January, this year, Changampuzha park at Edapally, Ernakulam witnessed the performance of Mohiniyattam by Brigitta Hegedus, Ksenia Lawrence and Katrin Thierfelde , the dancers from three different regions – Hungary, Germany and Russia. The event was organized by Dharani School of Classical Dance & Music, Kochi (www.dharanicochin.com) headed by Smt. Shyamala Surendran, the guide, Guru and inspiration of the three young dancers in Mohiniyattam.

Brigitta Hegedus was born in Hungary but she lives in Munich, Germany. While trained in yoga, she got attracted to the art and culture of India. With this passion, initially, she started learning Bharatanatyam at ‘Natyadhara’, a studio run by Chandra Devi, one of the senior disciples of Shyamala Surendran.   Brigitta had her debut performance in Bharatanatyam in 2009. Since 2007 she has been traveling to India regularly to attend the training at Dharani School in Cochin in Mohiniyattam and Bharathanatyam. Brigitta has been performing and teaching both the dance forms in Europe, mainly in Germany, Hungary and England (www.revathi-dance.com). In India, she had opportunities to perform in several stages. To promote and support the Indian classical dance forms, she is conducting workshops in India as well as Europe.

“I Love to Dance”, says Ksenia

Ksenia Lawrence is a Russian actor and dancer. She is running her own dance school ‘Orient’, with 40 plus students at St.Petersburg (www.orientstudio.ru) and teaching both Bharatanatyam and Mohiniyattam.   “I was looking for an art form which differs from modern dance, that can give much more than physical movements. I think Indian classical dances are more than just dance; I’m happy to do it, but its hard.” said Ksenia. In 2004, Ksenia came to Dharani School, Kochi and continued her learning in both dance forms under Shyamala. Since then, she visits Dharani every year to learn and practice dance.

From Munich with love

Katrin Thierfelder, a student of Brigitta is from Munich. She hadn’t any idea about Indian classical dances until she received a birthday gift, a literature about Natyadhara school, from one of her friends. While at Natyadhara School she attended a workshop on Mohiniyattam by Shyamala Surendran.  Attracted by this, she came to Dharani School and started learning Mohiniyattam. Once in a year she comes to the school to learn from Shyamala. “I love to listen to the Indian mythology and stories about the different gods in Hinduism and my passion for India started with my passion for dance” Katrin who works as a Clinical Research Associate for a pharmaceutical company, is not hiding her passion towards India and the Indian dance forms.

The performance at Changampuzha Park by the three young dancers from three different foreign countries took Mohiniyattam beyond the cultural and geographical boundaries.