The ‘2 Rupee Indian Doctor’ Struck Down By COVID-19 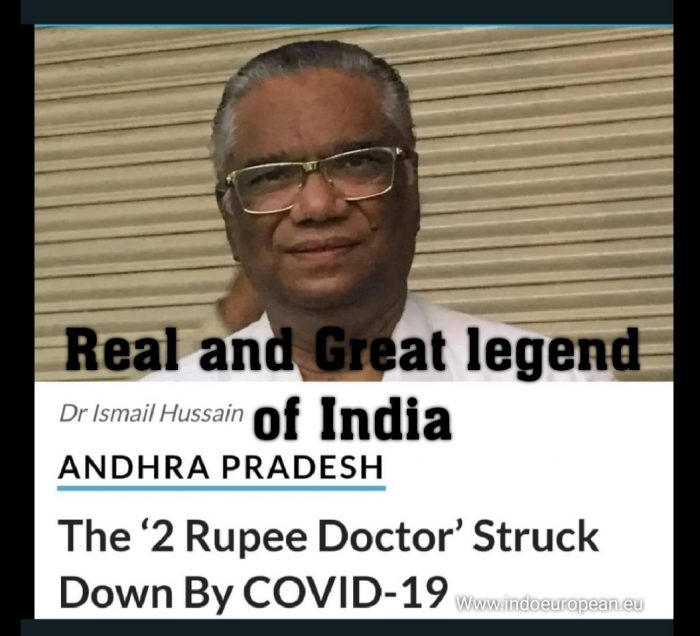 The news hit the people like a bolt from the blue. On the morning of April 14, Kurnool town, which has been in the throes of Coronavirus, was least prepared to receive this news. Though the fear of death was palpable everywhere, none had expected that the invisible Coronavirus would remove Dr KM Ismail Hussain from their midst. 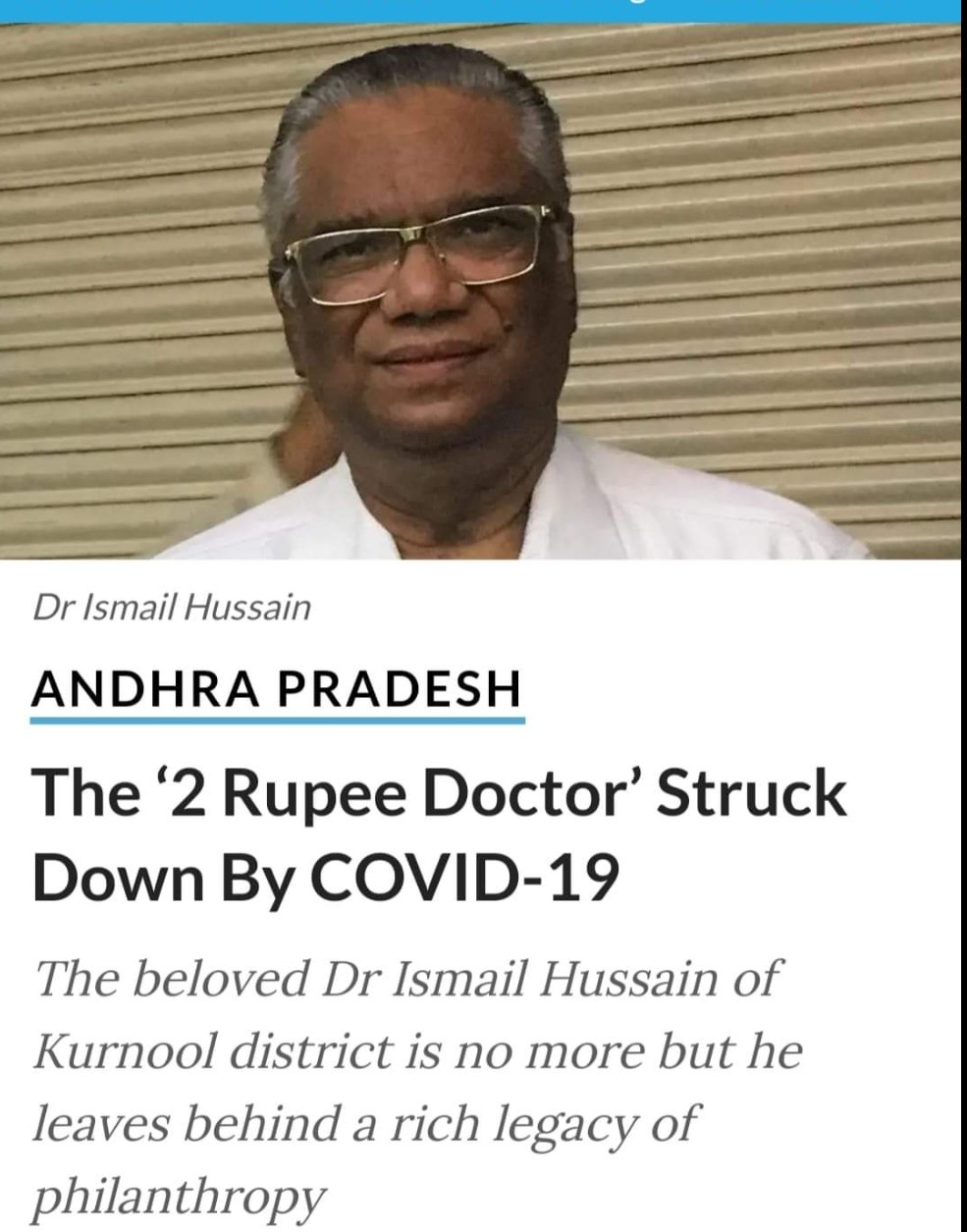 The doctor, whose consultation fee most of the time was no more than a heartfelt “Salam Saab” was declared dead of Coronavirus. He was admitted to the hospital a day before, following a sudden fall at home.

First he was shifted to a private hospital, then to the Government General Hospital, where he succumbed to COVID-19. Ironically, Kurnool’s most popular doctor’s funeral was performed as if he had no relatives and friends. He was cremated at midnight the next day as per the government protocol in the presence of six family members, who are now quarantined following their testing positive for coronavirus.

Who Was Dr Hussain?
He was a product of Kurnool Medical College and once was a popular faculty member of the KMC. For some time he was Principal of Dr Abdul Haq Unani Medical College, Kurnool.

Thousands of people regretted having had no occasion to grieve their beloved doctor. Had it been an ordinary day, a lakh of people might have thronged the funeral. Dr Ismail is a household name among the poor of the town, especially from the Kurnool Old Town area.

Though Muslims constituted the majority of his patients, he had never been branded in the city as a “Muslim doctor”. He was “Doctor Saab” for all communities. According to a family friend, Doctor Saab was a guiding light for the Marwari community in the city.

A lot of communal interpretations sallied forth against the benevolent doctor for treating the New Delhi Markaz returnees. Many took the opportunity to sling mud on one of the greatest sons of Kurnool, a town reverentially known as the Doab region of Andhra Pradesh, for two rivers Tungabhadra and Handri pass by the city and euphemistically for the harmony that flourished between Hindus and Muslims.

It is not out of context to say that Kurnool’s Muslim community produced three great doctors with human values, who had never practiced for money.

With the passing away of two of them, Kurnool district has become poorer. Of them, Dr Gaffaur, who is fondly remembered still, passed away in 1980.

The third doctor is Abdul Sattar, though retired as the Principal, Kurnool Medical College, has been untiringly serving the people still, without an eye on consultation fees.

As for Dr Ismail, no amount of allegations or attempts to malign him, would replace him from the hearts of lakhs of people from three districts of three states namely, Kurnool (Andhra Pradesh), Gadwal (Telangana) and Raichur (Karnataka).

Why did the experienced doctor not take precautions before treating Markaz returnees?

Kuradi Chandrasekhara Kalkura, an Udupi Brahmin friend of Dr Ismail told The Lede that, “He is more interested in treating the patient. No doctor would inquire if his patient had visited any religious congregation the previous month.”

Kalkara, who had a long association with the doctor talked about the philosophy of his friend.

“Dr Ismail used to say this: My father was a teacher. With his meagre salary, he led a life of dignity and honour. He brought us up with abundant love and affection. We inherited his legacy of reputation and transparency. God has given me enough. My son Dr Iqbal Hussain is settled as an Associate Professor at Kurnool Medical College. One son-in-law Imtiaz, is an IAS officer and the Collector of Krishna district. Two sons-in-law are also well settled. They do not need my assistance. I studied at the cost of the government. God has been so kind to us all. Why should I demand a consultation fee from the patients? 90% of my patients are BPL,” Kalkura recalled his recent conversation with Dr Ismail.

Dr Ismail would seldom prescribe clinical tests like blood and urine tests, X-ray, scans, and ECG. He would ask the patients what his preference was: injection or tablets. If it was an injection, the compounder would do the job. If the patient paid Rs 5 or Rs 10, it was the compounder’s fee. The doctor had no share in it.

His clinic opened in the late afternoon and would close in the wee hours of the next morning, until the last patient was taken care of.

Kalkura, recalls another instance in which he had a role to play. “This happened in the late 1980s. As it was election time, the police ordered him to close his clinic by 10.30 pm as working through the night was his usual practice. Patients would turn up even after the second show. As his clinic was located in the minority-dominant old town, he had to obey the guidelines.

Dr Ismail quietly obeyed the orders and locked his clinic by 10 pm and went home. His patients were unhappy at the early closure of the clinic. They gathered and went on a delegation to the office of the SP (Superintendent of Police) with a request. The media highlighted the matter as Kurnool Old Town’s legacy. The SP sought the intervention of Kotla Vijaya Bhaskar Reddy, former chief minister, who insisted that the patients’ will must prevail. The SP then invited a delegation for discussions. I was also a member of the delegation in my capacity as the president of the then Town Congress Committee.

Police had no option but to fall in line. The doctor was given permission to continue the practice according to his schedule and the convenience of the patients.”

Dr D Vadiraj, a popular general practitioner and Dr Ismail’s student, recalls an incident with nostalgia that had happened in 1975.

“In 1975, when Dr Ismail was an assistant professor in KMC, a house surgeon died of undiagnosed fever. His body was to be transported to his native place, Srikalahasti. There were no ambulances. Old kerosene-fueled Ambassador cars parked on the roadside near the General Hospital, were the only option. House surgeons, PG students and staff of the Medical College donated one day’s salary.

Dr Ismail came forward to bear the entire expenditure of the transportation and paid the donation amount to the poverty-stricken family. He also arranged a charity show in a movie theatre to help the family. Total collection of the show – Rs 4800 – was paid to the parents of the house surgeon in the form of a fixed deposit bond. This is only a sample of Dr Ismail’s philanthropic philosophy,” Dr Vadiraj told The Lede.

“There was no timing nor holiday for Dr Ismail’s clinic, even though it commenced in the afternoons,” said Abdul Rawoof, a religious teacher, closely known to the doctor’s family.

“The doctor’s motto was treatment first, fee later. For long, he used to take Rs 2 if the patient could pay, which earned him the moniker “2 Rupee Doctor”.

Many patients take the treatment and leave the place bidding salaam. There were occasions, when patients asked for change after giving a five or ten-rupee note, thinking that Rs 2 was his consultation fee,” Rawoof told The Lede.

Some who had the privilege of knowing the doctor closely said Dr Ismail had never asked for the fee.

“A cardboard box was kept on the table and the choice was left to the patients. If the patient had money, he could drop it in the box. Non-payment had never bothered the doctor,” recalled Boya Mutyalu, a 70-year-old from Kurnool Old Town.

Despite his huge popularity in Kurnool, he never aspired to enter politics. In 1989, NTR offered him an MLA ticket and a berth in the cabinet. He did not evince interest to enter the electoral fray. But Dr Ismail was one of the trusted men of former CM Kotla Vijaya Bhaskar Reddy and equally respected among the TDP and other political circles including the old BJP.

Kurnool has indeed suffered a great loss of a son of the soil.

We would like to Thank Jinka Nagaraju sir, for great article.