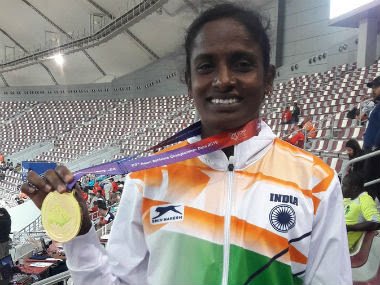 Doha: In the end, all that training, ambition, hours of obsessing about timings, numbers and distances, wraps itself around that one fundamental truth in sport – the will to win. In the Indian camp, on the second day of the 23rd Asian Athletics Championships, nobody exemplified it more than Gomathi Marimuthu who ran a personal best in the 800m for a gold; Tejinder Pal Singh Toor, a silver in the last edition, improved it to a shot put gold; Shivpal Singh bagged a javelin silver with a personal best while Jabir Madari and Saritaben Gayakwad finishing with a bronze each in the 400m hurdles. Madari running a personal best of 49.13 to win World Championships qualification. India’s medal tally after two days stands at 2 gold, 3 silver and 5 bronze. 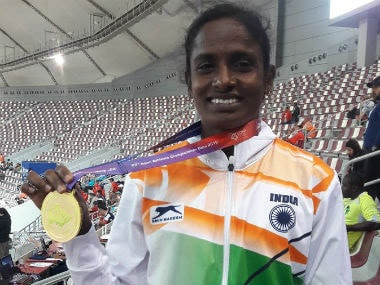 Gomathi had kept herself in the group of four led by China’s Chunyu Wang, Kazakhstan’s Margarita Mukasheva and Sri Lanka’s Gayanthika. The first lap was a struggle, five runners jostling for space. It was here that Gomathi didn’t yield and neither did she take up the lead position. “I was trying to remain in the field and keep going till the last 100 metres,” she said after the race. Gomathi was running against proven champions – Chunyu Wang is the reigning Asian Games champion with a personal best of 1:59.93. Kazakhstan’s Margarita Mukasheva has won the 2010 edition, 2014 Asian Games gold with a silver at the last edition. They knew what to do on the bend and in the last 50 metres.

Gomathi only wanted to be on the podium. So, when she looked down the stretch of the last 50 metres and found herself still in the lead pack, she decided to give her all. “I didn’t come in with too much expectation. So, I went for it,” she said. Both the Chinese and Kazakh were in for a surprise as Gomathi came in from the outside and with just five metres left went past Wang to clinch the gold. It was an exhilarating run. Two champions had been vanquished. “It was tough, but I realised that I was feeling strong so went for it,” said Gomathi. Her first reaction after winning the gold was to somehow call her mother.

No Thoughts on Losing Her Dad & Coach Couldn’t Stop Her From Winning India’s First Gold at Asian Athletics C’ships!