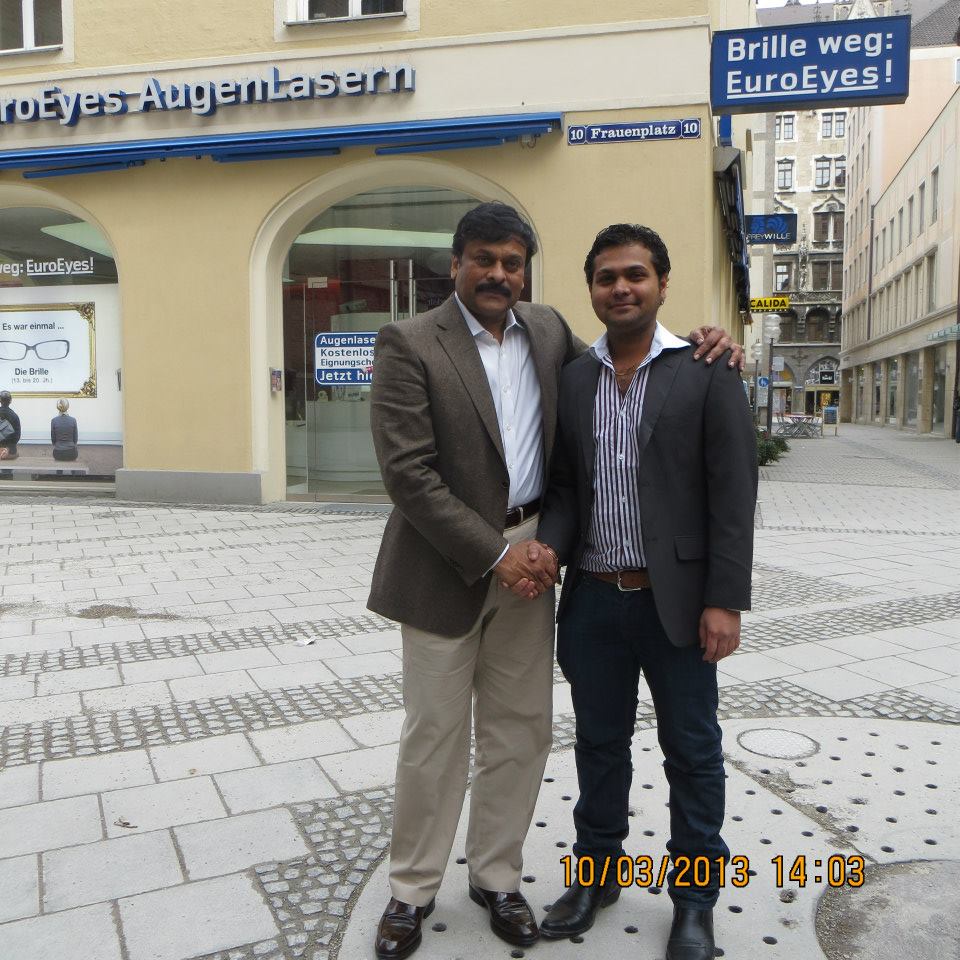 Chiranjeevi (born Konidela Siva Sankara Vara Prasad, 22 August 1955) is an Indian film actor, dancer, producer, singer, voice artist, politician, businessman, investor and a member of the Indian National Congress. He was the Minister of State with independent charge for the Ministry of Tourism, Government of India.[4] Prior to politics, Chiranjeevi has attended the Madras Film Institute, and had worked primarily in Telugu cinema, in addition to Tamil, Kannada and Hindi films. He made his acting debut in 1978, with the film Punadhirallu.[5] However, Pranam Khareedu was released earlier at the box office.

Known for his break dancing skills, Chiranjeevi has starred in 149 feature films. [7][8][9] He was the guest of honor at the 59th Academy Awards.[10][11] In the same year, he starred in Swayam Krushi, which premiered at the Moscow International Film Festival.[12] In 1988, he co-produced Rudraveena, which won the National Film Award for Best Feature Film on National Integration.[13] In a film career spanning thirty five years, he won four state Nandi Awards and nine Filmfare Awards South. Chiranjeevi’s 150th film was announced on May 2015, tentatively titled Auto Johnny. The film will be helmed by Puri Jagannadh.[14]

In 2006, Chiranjeevi was honoured with the Padma Bhushan, India’s third highest civilian award, for his contributions to Indian cinema, and was presented with an honorary doctorate from Andhra University.[15] In 2013, he inaugurated the Incredible India Exhibition, a joint participation of the Ministry of Tourism and Ministry of Information and Broadcasting at the 66th Cannes Film Festival.[16][17] He also represented Incredible India at the 14th International Indian Film Academy Awards ceremony held in Macau.[18] In 2013, IBN LIVE named him as one of “The men who changed the face of the Indian Cinema”.[19]

Chiranjeevi’s 1992 film Gharana Mogudu, directed by K. Raghavendra Rao, is the first Telugu film to gross over ₹ 10 crore at the box office.[20] The film made Chiranjeevi the highest paid actor in India at the time, catapulting him to the cover pages of noted national weekly magazines in India.[21] The entertainment magazines Filmfare and India Today named him “Bigger than Bachchan”, a reference to Bollywood’s Amitabh Bachchan.[22] News magazine The Week hailed him as “The new money machine”.[23] He was paid a remuneration of ₹1.25 crores for the 1992 film Aapad Bandhavudu.[24] In 2002, Chiranjeevi was given the Samman Award for the Highest Income Tax Payer for the assessment year 1999-2000 by the Minister of State for Finance, Government of India.[25] A poll conducted by CNN-IBN in 2006 named Chiranjeevi the most popular star of the Telugu Film Industry.[26]

Chiranjeevi founded the Chiranjeevi Charitable Foundation, established in 1998, which is involved in humanitarian activities. In 2008, he entered politics by forming the Praja Rajyam Party. In the 2009 Andhra Pradesh elections, Chiranjeevi contested from his native places, Palakollu and Tirupati. He was defeated by the Congress party candidate in Palakollu and was elected as a member of the State Assembly from the Tirupati constituency. He led the Praja Rajyam Party to emerge as the third largest party during the same election. Later, in February 2011, his Praja Rajyam Party merged into the Indian National Congress.